One’s Smart Piano helped me play, but not understand 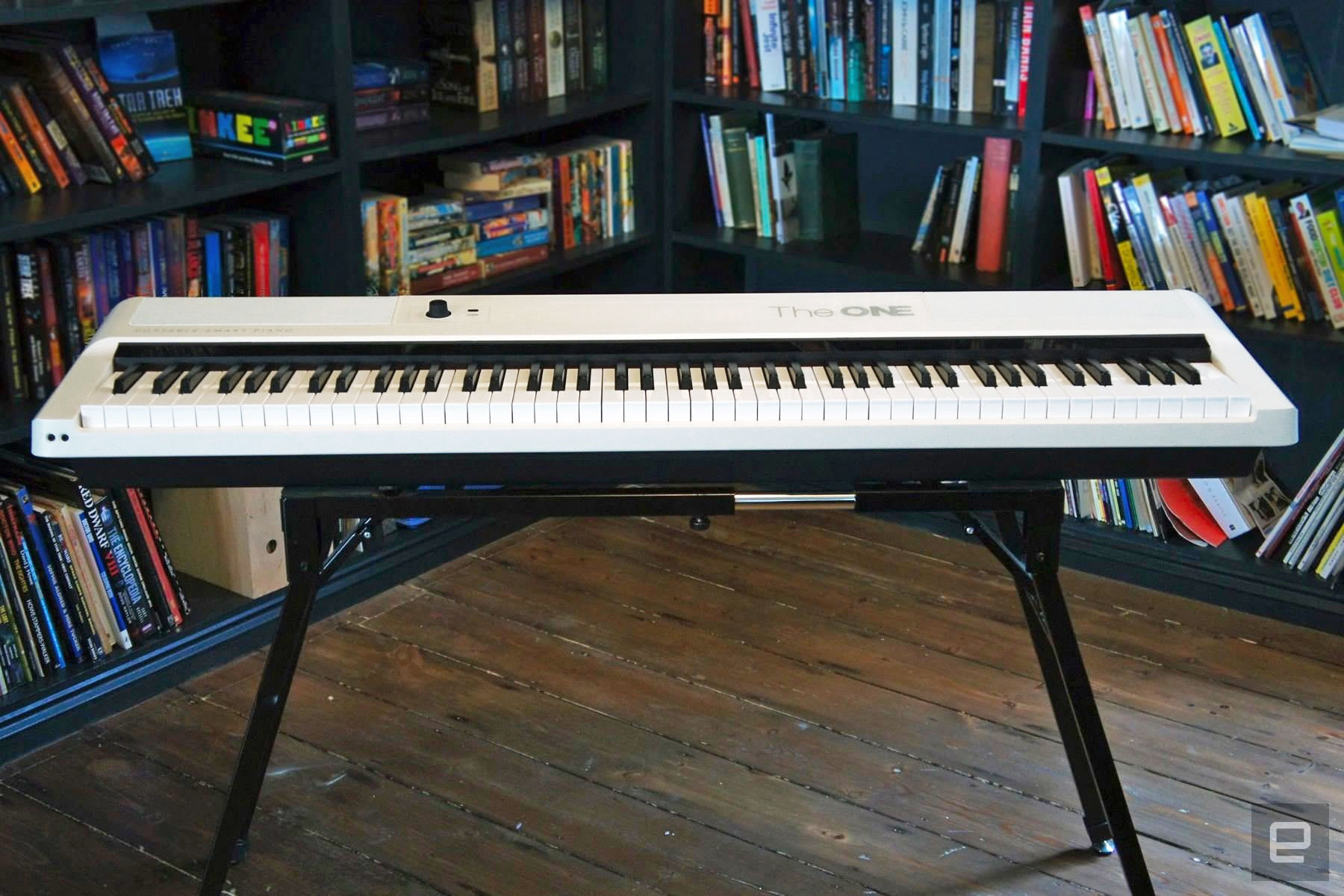 As a kid, I was given a book about a famous doctor who may or may not have been Albert Schweitzer. The first chapter is how he, as a young boy, learned the value of practice from his music teacher. It was a lesson he learned early enough to become not only a virtuoso musician but also a physician and philosopher. I suspect I was given the tome as a way of encouraging me to practice the piano in the hope of becoming as good as ol’ Albo. That didn’t quite happen. That might be because I’ve never been one to practice too much. But then I wonder if it’s because I didn’t have the right tools, like One’s Smart Piano. Devices like these teach novice musicians to play in the same vein as most rhythm games. If you’ve ever seen Guitar Hero, DDR, Rocksmith, Synthesia and its kin, then you know what the deal is. It’s an otherwise-ordinary digital piano with a strip of lights running above the keyboard that light up when it’s time to play. That is, of course, if you’ve connected it to a device (it’s obviously intended for a tablet) that sits on the stand.

To be fair (to myself), I’m not a terrible pianist. I’m just not one that’s capable of playing music under observation. As soon as I know someone’s listening or watching (or that I’m being recorded) my aptitude deserts me. It’s funny because I don’t suffer from stage fright: I perform improv and stand-up in front of hundreds of people without worry.

Of the three-and-a-half models in One’s range, I’ve been using the $770 Smart Keyboard Pro, which I believe is the one most people should opt for. At the higher end, there’s the $1,350 Smart Piano, with 88 hammer-action keys and built-in soft, sostenuto and sustain pedals. At the lower end, you have the Smart Keyboard, a 61-key portable keyboard for $269.99. And, for $30 less, you can pick up the Hi-Lite, which is just a light-up strip you can retrofit to your existing digital piano.

The Keyboard Pro is closer to the Smart Piano, packing 88 hammer-action keys and 128-key polyphony. The big difference is the lack of a wooden stand, and consequently, you’ll need to buy an aftermarket sustain pedal. Interestingly, there’s only the one 6.35mm port ’round back for the sustain; the soft and sostenuto port is hidden under the keyboard’s body. And if you want those pedals, you’ll have to buy the accompanying stand from One for an extra $150. 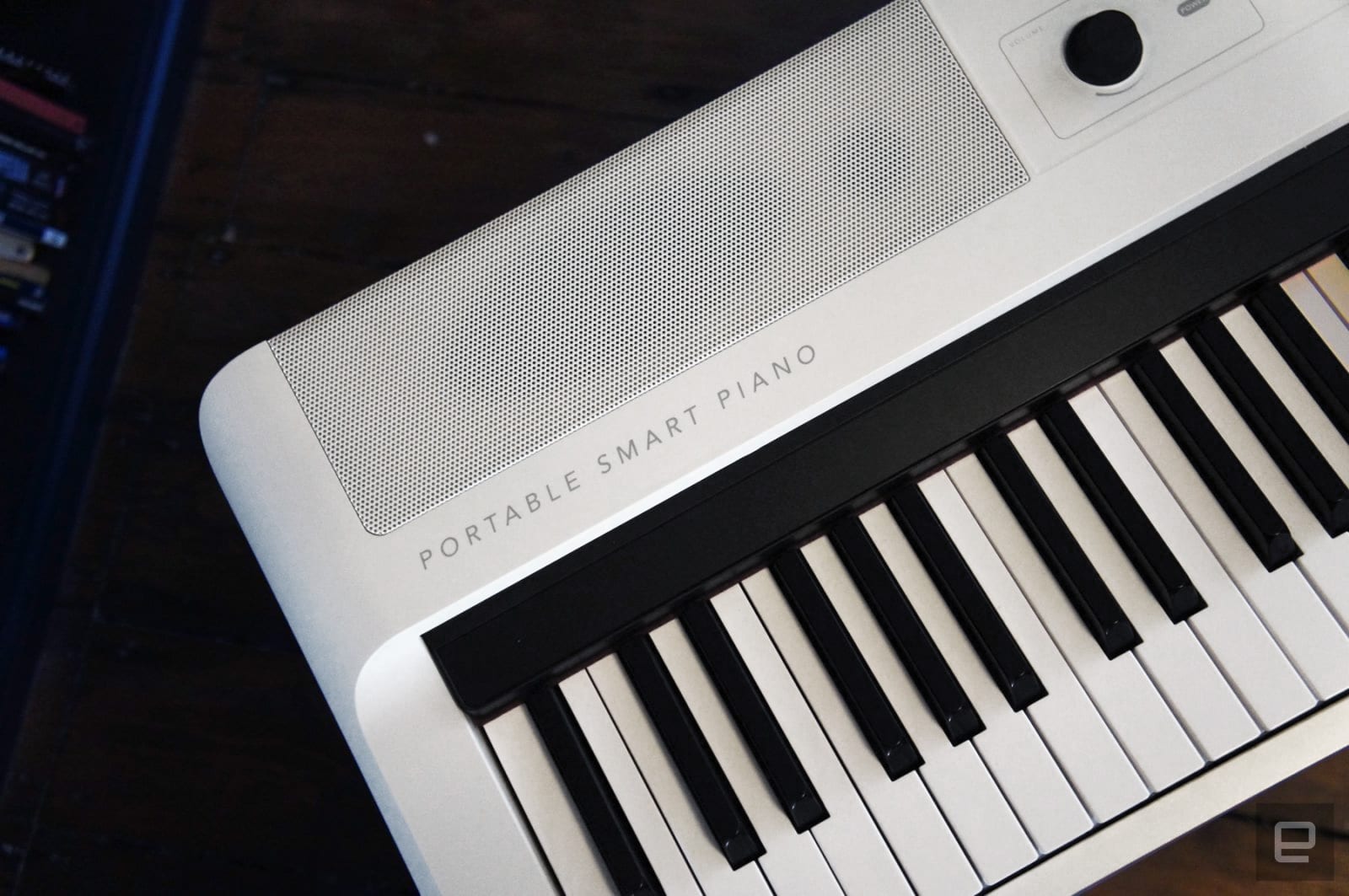 Priced at $800, it’s roughly in the same price bracket as Casio’s low-end Privia range of digital pianos for beginners. I had expected the Smart Keyboard Pro to feel cheap and plasticky, but it’s certainly not. In fact, I’d say that the quality isn’t that much of a step down from a low-end, but not cheap, digital piano from Casio or Yamaha.

The keys, too, have a wonderfully weighted hammer action that’s again the equal to a low-end digital piano. Certainly, they don’t have the same weight, texture and presence as you’d find on a hybrid piano or a high-end model. I mean, they’re plastic, not coated wood or any other sort of substitute for ivory. But for this sort of price, I have few complaints about the keys.

Most digital pianos have pretty awkward user interfaces, either with a series of ugly and arcane hardware buttons, or ugly and arcane LCD displays. One (the company) sought to get rid of all of that by putting all the controls into its mobile app rather than on the device itself. On the upside, it means that this keyboard is beautifully minimalist, with just a power button and volume control. On the downside, it means you can’t do much of anything without a phone connected.

Specifically, if you want to change the voice from the default Grand Piano setting, you’ll need the app. According to the company, there are 691 timbres, 11 drum sets and 256 GM2 timbres you can cycle through. And, like most digital pianos, you’ll only ever want to use a handful of them — unless you really, really love crappy MIDI synth sounds. The company says that it sampled all the voices itself.

Initially, my plan was to pick up and learn a popular song of the day and hope my skills hadn’t atrophied too much. Perhaps I could glean the bare bones of a recent hit, dash out to find my nearest public piano and be proficient enough to get passers-by to do a little dance as they passed me. In the UK, various public institutions — from the train station to the shopping mall — are putting old uprights out for anyone to use.

Sadly, my abilities had deserted me, and more importantly, the One’s library of songs didn’t offer much to inspire me, either.

MusicNotes already has Thank u, Next and the songbook from A Star is Born and The Greatest Showman on its front page. One’s music store has the songs from the Barbra Streisand version of A Star is Born.

As a kid, one of the big problems with learning the piano over the guitar was that most mainstream music was written for the latter. If I, as a piano kid, wanted to learn a Foo Fighters song, I’d have to buy the guitar/tab/vocal version and note it up with a pencil. That situation has improved in the last few years thanks to online publisher platforms like MusicNotes. Sadly, One’s music store is more reminiscent of my childhood music shop than the present situation. 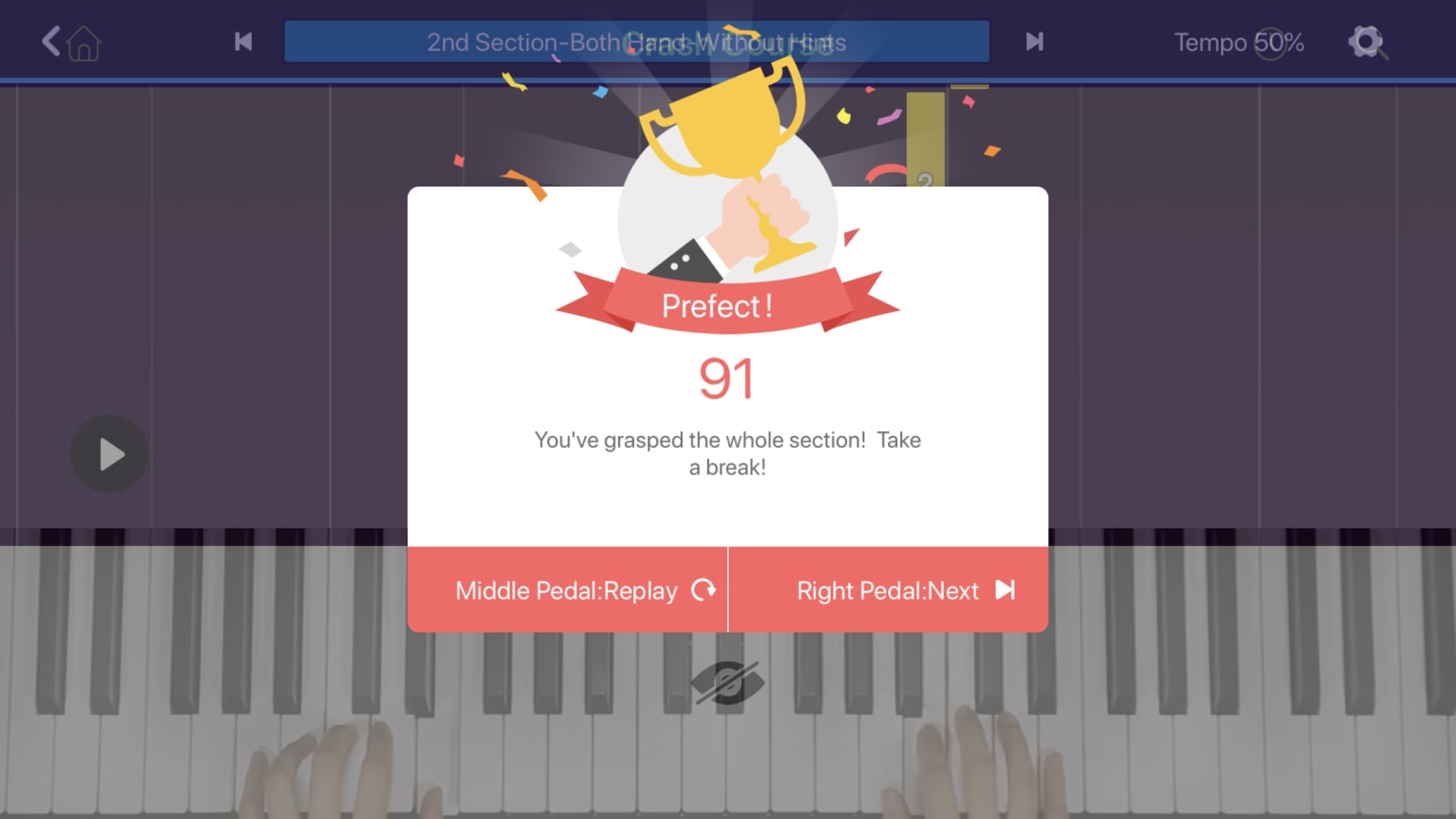 Unsurprisingly, there’s an emphasis on classical music, with the popular music limited to stuff that’s very popular and very out of date. Search for a superstar like Taylor Swift, and you’ll find just 14 tracks, all of which were recorded in or before 2012. Ariana Grande, similarly, only has six songs available to buy, despite being everywhere this year. Meanwhile, MusicNotes already has Thank u, Next and the songbook from A Star is Born and The Greatest Showman on its front page. One’s music store has the songs from the Barbra Streisand version of A Star is Born.

Now, to One’s credit, it has recently entered into a deal with Alfred Music and Hal Leonard, which should remedy some of the problem. Both are major US music publishers, and a glance at their current libraries would improve matters here no end (Taylor Swift! Ed Sheeran! Lin-Manuel Miranda! Queen! Elton John! Katy Perry! Bruno Mars!).

I try, for a while, to master Let It Go from Frozen and Carly Rae Jepsen’s Call Me Maybe, which are still kinda relevant. I also have a bash at Sarah Brightman and Andrea Bocelli’s Time to Say Goodbye, but it’s just too hard. Imagine your first time playing Dance Dance Revolution and the machine is set to the hardest song at the hardest difficulty, and you’ll be there. I never was a concert pianist, and my hands are out of shape enough that I couldn’t even hit some of the octave-spanning chords.

So, I opt for the piano’s Crash Course option, which will nurse you through the first stages of a song. The selection of 16 tracks comprises the sort of standards everyone wishes they could belt out in an emergency. You know, the Wedding March, We Wish You a Merry Christmas and Twinkle Twinkle, Little Star. I opt for Beethoven’s Für Elise, a classical standard that is one of the first songs any budding pianist will attempt to learn.

The app takes you through each movement, hand by hand, piece by piece, alternating between the right- and left-hand parts. When you’re at around 80-percent accuracy for both parts on their own, you can then work to play them together. Piece by piece, the song is built up until you’re well drilled in the basics of the song. 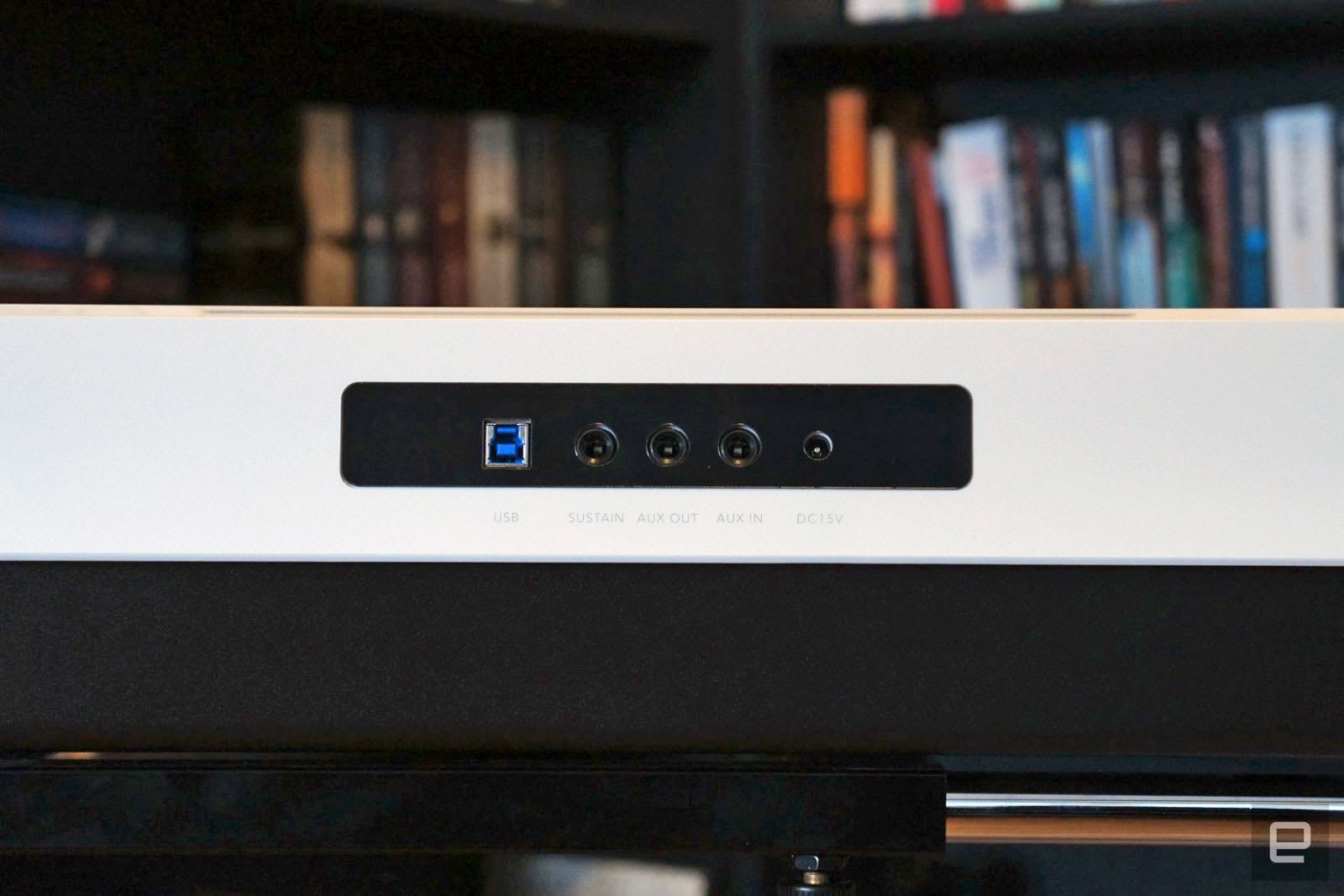 If there is a concern, it’s that it’s hard to recover when you make a mistake because you know only the pattern to follow. All I’ve done is rote-learn the piece, rather than gain any meaningful understanding of the music. But then, given that I’m not going to become Albert Schweitzer (or whoever it was), is that too much of a big deal?

Well, yes, because when you graduate from the Crash Course, you’re looking at a catalog of songs all available as sheet music. And you haven’t learned how to read sheet music.

The disconnect here is that you’re learning how to play a tune from memory as a beginner and are then dropped into the deep end when you graduate. Rather than a gentle, staggered learning curve, you’re going straight from training wheels to the Tour de France.

That’s not a fatal flaw, but one that One will need to address if it wants its products to have real utility. Perhaps the company could find a way to algorithmically break down new songs into small, teachable portions. Or perhaps the training element can be refined to incorporate sight reading.

I never thought that the One Smart Keyboard Pro would make me Josh Cohen or Max Haymer. But I’m planning to impress the relatives with Für Elise this holiday season, if my nerves hold.